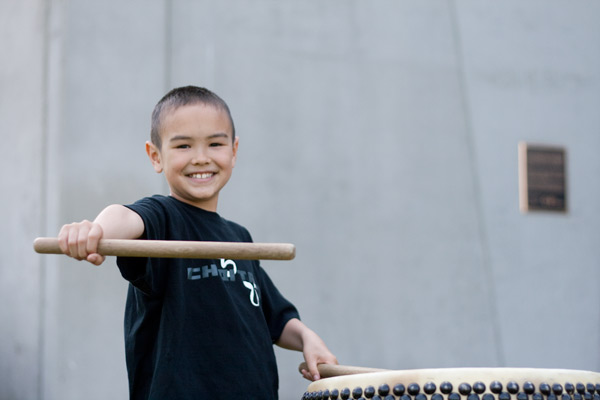 When San Jose Taiko performed in the summer of 1979 at the third annual Powell Street Festival, the effect was that of a shiny pebble dropped in a still pond, with ripples spreading in an ever widening arc across the country. Katari Taiko, Canada’s first taiko group, was formed that same fall—inspired by the youthful exuberance of the American group. Over time, following Katari Taiko’s example, other taiko groups began to spring up across Canada and soon there were groups in most major cities. It started slowly, but over the past thirty years, taiko has embedded itself in the public consciousness, with audiences everywhere embracing that same contagious energy that San Jose Taiko brought to Powell Street that summer netflix app für mac downloaden.

Vancouver’s Chibi Taiko is one group that can trace its lineage directly to the influence of the San Jose Taiko Group. In fact, while none of the members were even born that summer, the group, as much as any other, carries on the bloodline of taiko in Canada. Three of the members, Kayo Homma-Komori, Emiko Newman and Kaya Newman, are the children of two original Katari Taiko members. Shinobu Homma, the founder and head instructor of Chibi Taiko joined Katari Taiko shortly after its founding, while assistant instructor John Endo Greenaway, Emiko and Kaya’s father, was a founding member of both Katari Taiko and Uzume Taiko, Canada’s first professional taiko ensemble.

Shinobu founded Chibi Taiko in 1993, shortly after arriving back in Vancouver from Toronto where he had co-founded Wasabi Taiko along with his wife Lucy Komori, her sister Leslie, and Rick Shiomi, all Katari Taiko alumni youtube videos downloaden und mit whatsapp verschicken. 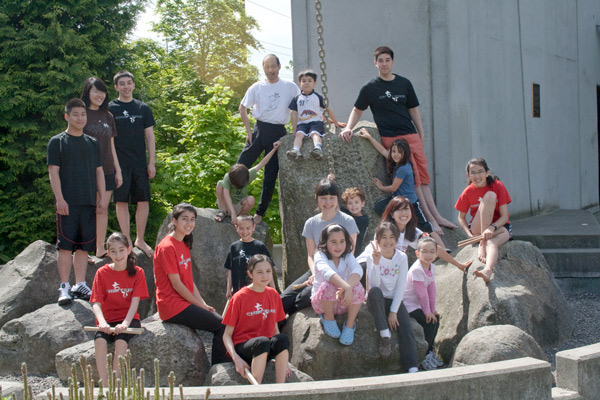 Shinobu made the decision not to resume performing, but to instead turn his energies to teaching taiko to children. Partly, this was to provide an opportunity for daughter Kayo to learn taiko in the company of other children. He chose the name Chibi, or child, and recruited five other children between the ages of six and ten. Two retired Katari Taiko members, Naomi Shikaze and Joyce Chong signed on to help out and the group was off and running.

Parental involvement has always been important in terms of the operation of the group, so while the instructors take care of the practices, parents are involved in keeping the group operating download knipprogramma.

Karen Riley, whose sons Brandon and Jordy are among the senior members, recalls her entry into the world of taiko: “In September 1995, my aunt saw an ad for a children’s taiko workshop and suggested that my kids might enjoy it. Well, she was right! They loved it and wanted to sign up right away, and have been playing ever since. Besides the friendships they have made, taiko has taught them to work together as a group, and the many stage performances have helped to build their self-confidence.”

By its very nature, a children’s group faces a high turnover over the years and Kayo is the sole remaining original member, although the core group of senior players has been together for a long time now. As Jordy points out, it is a close-knit group that has in effect grown up together: “The most rewarding aspect of being with Chibi Taiko is the cohesion of our group and how that has developed throughout the years warn app nina. I see our group as more of a team, with everyone having unique traits and skills about them which defines each individual member. Bringing different styles and backgrounds (dance, concert percussion, sports, size, age, gender) together makes our group dynamic, rather than having everyone look the same. The concept of bringing different strengths while playing a song together is very intriguing to me.”

Six years ago, a new crop of junior drummers were brought on board to prepare for the time that the senior members began moving on to other pursuits, however an unusually high dropout rate meant that only Emiko remains with the group. At age 15, she is in the process of transitioning into the senior group, leaving her in a unique position. “Because the seniors are all older than me and have been playing together for a long time and the juniors are all younger than me, it’s kind of strange because I am in the middle, and I play with both groups.” Still, she says, it is a good challenge learning the advanced repertoire and trying to keep pace with the older players anno zum downloaden. “I try to elevate my playing to match their abilities.”

The senior Chibi members are almost all in university now, and a new crop of younger drummers is coming up behind them. The junior members, aged eight to twelve, are in the process of learning more advanced repertoire and are beginning to do simple solos on the drums.

Like Karen, Yuko Horn saw an article on Chibi Taiko in a local paper. “Dayna got so excited about trying something new. Dayna’s younger sister Cassandra was at practice every Sunday and we naturally thought that she would join when she got older download komoot route. I LOVE seeing the kids perform at the local festivals and events and ‘wow’ the audience. Even though I know all the pieces from their practices, every performance looks different. It feels like Chibi is one big family. The senior members are like my daughters’ big brothers/sisters, and I can picture them as the future Dayna/Cassandra. I would love to see them in a duo someday . . .” 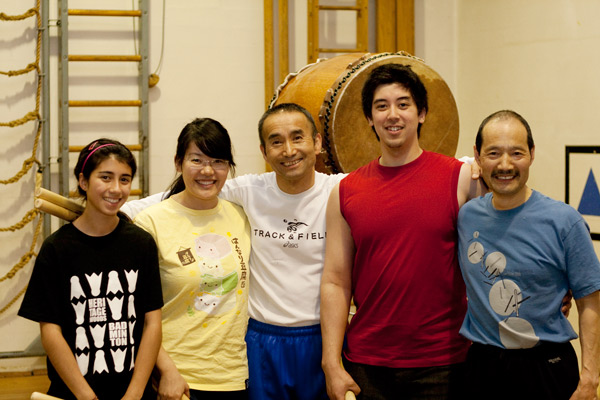 For her part, eleven-year-old Dayna is enjoying being a part of the Chibi family. “It’s fun to watch the older, more experienced members play. They are more entertaining to watch. I play drums in my school band, but it feels very different from playing taiko. The sound is so different. Playing taiko is more fun because we can do all kinds of different sounds and express ourselves more even though it is only one drum we play at a time.”

In addition to appreciating the close-knit nature of the group, all of the parents agree that the cultural component is very important to them google drive link herunterladen. For some of the kids, taiko is their only connection to their Japanese roots (almost all of the Chibi members are hapa), while others stay connected to their heritage through Japanese school or other activities.

Yuko notes that the cultural component is important to her, but having her two children in Chibi Taiko has also changed the way she herself looks at taiko: “It is funny that I have been trying to experience something Japanese after I moved here. I did go to lots of local matsuri when I was still in Japan, but taiko was just one of the festival performances, nothing too special. But hearing the taiko beat here in Canada always gives me chills, goosebumps, sometimes I get tears in my eyes herunterladen. It must be something that my DNA is feeling without me noticing.”

Jean Yi enrolled her daughter Torin in Chibi Taiko four years ago and her son Kyle, who is eight, joined the junior group recently. As a second generation Korean Canadian, she has a different perspective:  “We’re there mainly for the drumming. But I am a self-professed Japanophile who studied Japanese language and went overseas to visit Japan before Korea (which didn’t go over well with my parents who lived through the occupation but they’re pretty liberal and support the kids in taiko). It was my idea for them to join the group to get some Asian cultural exposure, learn to perform and work within a group and I admit, because I’m too old to learn to play myself Download sand balls for free. In any case, we are enjoying being part of the group more and more, and I really enjoy seeing the kids developing. John and Shinobu are truly dedicated instructors and still shine when they perform, setting a great example for the kids.”

For the past few months, the drummers, instructors and parents of Chibi Taiko have been preparing to head to Japan, where they will spend ten days in Onomichi, a small seaside town near Hiroshima, as well as in Osaka and Tokyo. Filmmaker Linda Ohama, whose daughter Caitlin and granddaughter Skye are both in Chibi Taiko, has been living and working in Onomichi and is helping coordinate the visit for the twenty children and adults who will be descending on the town in mid-July.

Chibi Taiko will be hosted by Betcha Taiko, a local intergenerational taiko group whose members range from children to seniors. Plans include learning one of Betcha’s original pieces and preparing for a joint concert in the town on the final night before heading to Tokyo. In between the taiko workshops, the group will be getting a taste of traditional Japanese culture and exploring the countryside. The Chibi kids will be billeted with local families for an authentic Japanese experience.

In preparation for the trip, Chibi Taiko is presenting a fundraising concert at 2pm on Sunday, June 21 at the National Nikkei Heritage Centre. Joining the senior and junior members of Chibi Taiko for this concert will be the Chibi Taiko beginners group, who have been training under the direction of Leslie Komori, in what will be their first public performance. There will also be special guest appearances by Steveston Tera Taiko and Yuaikai Ryukyu Taiko. Tickets can be purchased at the door or through e-mail at lkomori@telus.net.
www.chibitaiko.bc.ca

The first children’s taiko ensemble in Canada, Chibi Taiko was formed in the fall of 1993 with the goal of passing this unique and dynamic performing art on to the next generation of Asian Canadians. The group’s philosophy emphasizes cooperation, leadership, responsibility and spirituality in addition to the physical and musical discipline needed to build a cohesive and dynamic taiko ensemble.
Chibi Taiko is a member of the Vancouver Taiko Society